Irish folk vagabonds, Lankum, who are leading a stunning revivification of music in Dublin, popped into Bristol last night as part of their Autumnal UK tour. Here's a report.


A bitterly cold, dark and somewhat dank Bedminster, on the southern side of the city. All the shops on East St., bar Asda, are pulling down the shutters and buses are hauling people to a hopefully warming home; which leaves us stragglers, the desperately homeless and regular chancers to pass the time by trying to ignore one another in the early evening chill. I glance into the window of The Barley Mow, which was once a rather nice trad. pub, full of the superannuated hippies of Windmill Hill and the City Farm, to see it looking tired and empty, so decide not to slake my thirst there. Spitting distance around the corner is The Apple Tree, a once notorious cider house, which I find is, somewhat surprisingly, still open for business but looking dodgier than ever, so that's a no from me this time. Nothing for it but to just join the frozen queue outside Fiddlers, where it seems that at least half of the boho-folk population of places like St. Werburgh's and Totterdown are gathering.

Once inside  we soon begin to warm up, enjoying the dark charms of support act. John Francis Flynn, who performs some finely idiosyncratic tunes on guitar, voice and two tin whistles played at the same time, like an trad. Irish Rahsaan Roland Kirk. He says he hopes to have an album out next year, so definitely worth checking him out. He a has an excellent dry wit, too.

By the time Lankum troop onto a stage covered in various harmoniums, concertinas,  pipes, fiddles and guitars, the place is rammed with a sell-out 450 folky folk. The four-piece are promoting their new album, The Livelong Day, which  has been playing almost non-stop in my humble abode the past few weeks, so they start off with their brilliant take of the old chestnut, 'The Wild Rover'. Don't imagine a Dubliners style sing-along and 'no nay nevers' with this lot, though; this is darker stuff altogether; wild, scary and thrilling all at once.The roar when this first song is over is an immediate indication of the love the audience holds for Lankum. The evening is filled with such highlights drawn from their three long players (the first album recorded under the moniker, Lynched) plus their fab rendering of 'Rocky Road to Dublin', where they show off their four part harmonies to full effect which actually remind one, more than anything, of English acts like The Watersons and Swan Arcade. All four band members are superb singers and musicians but I'll specially mention Ian Lynch on concertinas,  uillean pipes, whistles and vocals and Radie Peat, in wonderful black platform boots, on harmonium (a massive feature in their sound), squeeze boxes and haunting voice. She is brilliant.


There were, inevitably, encores but no room for the band to do the walking off stage bit before being called back on so they just get on with it and in some style, including a peak moment when they get legendary singer, Frankie Armstrong, to join them on stage for a rendition of 'The Old Man from Over the Sea', which they learned from her 1966 recording. This was a heart-warming, invigorating night of music.

A wonderful gig and then a long, dark,drive back home, hoping to see these chaps many more times.

I quite recently came across a remix album by Tommy Perman entitled Emergent Slow Arcs, which is an aural resculpting of Welcome Strangers (2018), the second long playing release by Scottish band, Modern Studies. I was very taken with the Perman album and wondered what the band sounded like under normal circumstances. A brief piece of research led me to their debut LP (as we used to say), Swell To Great (2016) and it really is. This is a great recording that sort of sounds a bit like Low making a new soundtrack for The Wicker Man, if you know what I think I might mean. It's been spinning here at Rickety Rackety Towers pretty much non-stop in the last day or so. Below is 'Dive-bombing' from said debut.

Irish folk vagabonds, Lankum, who are leading a stunning revivification of music in Dublin, popped into Bristol last night as part of their ... 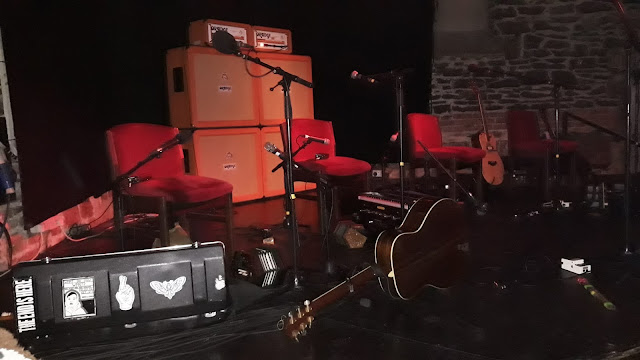